Do you guys remember that movie you probably saw back in High School ?
You know the black and white one during Government History class ?

Even if you don't, you've still probably seen this one.


Youtube unofficial trailer
(this trailer is awesome is cut like a modern movie trailer, with its own fake orchestrated soundtrack >__<) 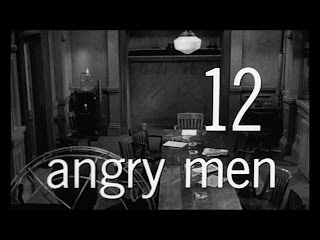 (there will be spoilers - but really ... who hasn't seen this movie)

"12 Angry Men" is bassically about twelve jurors in a murder case. A boy that grew up in slums was accused of murdering his father. Now in a normal "CSI" episode, or any other Cop drama, the investigation and the trial usually take up the most scene time. With jurors only as an after thought. But this movies entire focus is on the deliberations of the jury members. 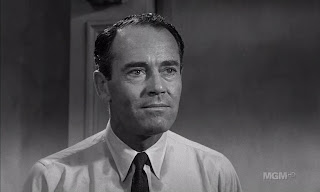 What i love about this movie is its characters. In an hour, we get to know all of these jurors better than some TV show characters within a season. Each juror has their own biases, their own opinions. Each one is given their own space to make these known to the group and the audience. We can see how some of them are willing to cast their vote for the easy way out. Others unknowingly pass judgment based on their own life experiences. But only one person is willing to stand up and see that a human's life is in their hands. 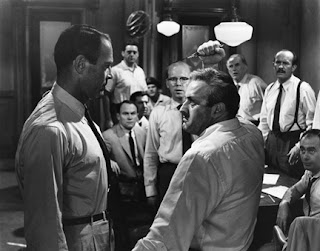 Probably the most recognized and referenced scene of the movie is when the character played by Henry Fonda provokes another juror. This Juror, taken by his own arrogance, said that when someone says "I'll Kill Ya", then that person means it. Fonda's character moves to prove him wrong by openly insulting the Juror, calling him a sadist. In that Moment of anger the Juror loudly proclaims " I'll kill him, I'll Kill Him! ". Fonda calmly replies with "You don't *really* mean you'll kill me, do you?". 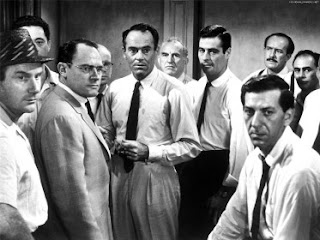 Despite the differences between all twelve of the jurors. There is a part of me that could identify with every character. Hard as it is to accept, I have my own biases and I won't really know if or when those biases will ever take a hold of me and blind me from the truth at hand. I think that is what this movie is really about. Showing us the different sides of people. That our prejudices may blind us from seeing the truth in things, and what the possible consequences might be if we continue in them.

I really do like this movie, and it goes to show you that movies they show you in high school can be good sometimes. ^__^
Posted by starnerd at 4:45 AM
Email ThisBlogThis!Share to TwitterShare to FacebookShare to Pinterest
Labels: Blog, Movies